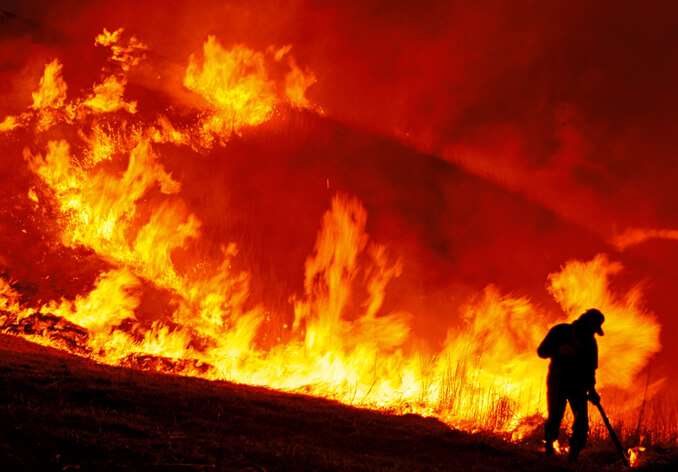 Japan is surrounded by the sea around the country, and there are four seasons: spring, summer, autumn, and winter, and you can enjoy beautiful scenery in each season. It is also one of the attractions of Japan that there are volcanoes that continue to work under the water, such as Mt. Fuji, and hot springs that can not be tasted in Australia.

However, the volcano which is such a big attraction in Japan also has the risk of causing a major disaster called earthquake. It can not be avoided in Japan from earthquakes with few periodical occurrences to large-scale earthquakes that have struck the new Tohoku region.

Natural disasters that occur in Australia as frequently as Japan’s earthquakes will be wildfires. Eucalyptus, which is endemic to koala, an endemic species of Australia, is a popular tree distributed throughout Australia. This eucalyptus tree contains a very large amount of oil, which is a major reason for causing a forest fire.

There are various reasons for wildfires, and there are various causes such as weather conditions, topography, and man-made disasters. Forest fires are very horrible disasters, they have explosive destruction that can not be controlled by firefighting activities unless they are properly dealt with in a small-scale state, and they can only destroy millions of dollars. It also includes the possibility of taking many lives.

A total of $10 million in wildfires identified as a major disaster in Australia recorded 23 cases from 1967 to 1999. In the old record, we will burn up 2 million hectares and take 71 lives in a large mountain fire called Black Friday, which hit Victoria, in large numbers of wildfires recorded in the past We swallowed the whole town and damaged more than 1000 houses. In addition, a large-scale wildfire that occurred in recent years was a four-person sacrifice that completely destroyed more than 500 houses in January 2003 when the wildfire occurred in Canberra, the capital of Australia. The fire caused damage to almost all areas of ACT, totaling over $ 300 million in total gold.

And the biggest and worst wildfires in Australia’s history, which occurred in Victoria in 2009, are called “Black Saturday bushfires”. As it was widely taken up as news on Japanese television, I think many people are in memory. This is a scale enough to confirm a forest fire from satellites, and the burned surface area is said to be more than 450,000 hectares, and the area with Tokyo is about 210,000 hectares. Will be burned out.

Ultimately, there were 173 deaths and over 400 serious injuries. The number of days from the fire to the declaration of a extinguishment from the state government was announced to be $ 4.4 billion in economic terms, which continued to burn for about a month and a half, but the amount of damage is quite modest It is said. In addition, it is a security deposit that insurance participants seek from an insurance company, but it is said to be about $ 1.2 billion, but it is said that this amount is also undervalued and it is not possible to provide an accurate compensation amount. Crops that were scheduled to be harvested this year as items excluded from $ 4.4 billion and agricultural land planned for next season are excluded, and the government estimates that 11,800 livestock will be used, 150,000 acres for livestock, and The feed is expected to reach 32,000 tons.

Not only people who took out insurance and received insurance, but more than in Japan, lawsuits are routinely filed in Japan. The largest group prosecution in Australia was carried out when the electricity company failed to install protective equipment on the wire. At a lawyer company that took charge of defending the victims, it was claimed that the wire that was dropped by the forest fire induced further fire. As a result, it became a settlement in 2014, but it became to install a device for huge settlement and fire prevention, but that huge deposit causes the subsequent increase of electricity bill as a result There is a dead background.

In any case, wildfires are not only the actual victims and the affected area, but also secondary damage and extra damage at the time difference between three and three, which can be said to be a horrible disaster.