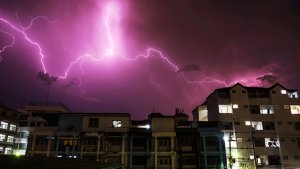 Among the disasters that occur frequently and have a major impact are lightning strikes with storms. This is not limited to Australia, and different countries around the world have different names such as typhoons, hurricanes, cyclones, etc. However, due to the influence of abnormal weather on a global scale, the damage caused by human beings is exceeded year by year.

The amount of damage to urban areas caused by a storm is as large as 1% of GDP in large cities in a single heavy rain. In addition to floods, storms also carry lightning strikes. Australia’s lightning power is incomparably more powerful than Japanese lightning, not only blackouts, but also destructive enough to completely stop public facilities such as railways. The frequency of lightning strikes on buildings is also much higher than in Japan, and not only Australia but also countries in the world are struggling with lightning countermeasures.

As an aside, in early January of this year in Sydney, Australia’s first city, there was a complete crash of the train timetable. The station’s home is full of people who can’t get into the home, and when the train arrives, the passengers put themselves in the space as they are, and just like the developing countries such as India, a picture of the crowded state flows in news daily Yes. The Sydney Railroad Bureau initially said it was a major disruption of diamonds due to large-scale lightning strikes and storms, but it turned out that it was actually a guerrilla-like sabotage of a labor union with dissatisfaction with salaries etc. Although overseas announced the impact of natural disasters, it was actually a different reason. There are many such cases, so you need to be careful.

To return to the point, Asian countries with high economic growth and Australia have a close relationship with each other, so they are easily affected by the benefits and influences of the economy, and have achieved solid growth. In addition, as the purchasing desires of wealthy people who purchase apartments for investment purpose in Australia continuing land prices are still strong, and there is absolutely no residence in other urban areas, construction rush continues in Australia now. . In addition to buildings, tower cranes are also installed at condominiums and high-rise building construction sites, and both are high-rise floors, so it is very likely to encounter lightning strikes during a storm, so even during construction For safety even after construction, installation of lightning rods is obliged.

The most popular lightning rod system is a lightning protection system using a pre-Vectron terminal. This system protects a radius from 43 meters to 107 meters, and at the time of a lightning strike the terminal emits energy stored by a direct hit, follows a vertical line and emits charged ions to the ground.

Australia also mines abundant underground resources from the country. There are no tall buildings and no natural objects to block around, and lightning reports to mining facilities have already been reported in great numbers.

At a mining site, there are cases where resources such as oil, coal, and natural gas are combustibles themselves, and there are cases where mines are filled with highly flammable gas. When these highly flammable materials are charged with lightning energy, they can ignite and cause a large explosion that can blow away the mine or the mine itself. Therefore, in addition to direct lightning strikes measures, enhancement of the earth wire that releases the lightning strike energy to the ground. Protection of power supplies and IT equipment that handles huge amounts of data. Comprehensive package services, including inspection and maintenance, are in high demand from the market.

Australia is blessed with a vast land area that is about 20 times as large as Japan, but on the other hand, most of the land is covered with a dry earth that is not suitable for human life. In addition, there is a blank area between urban areas and urban areas, and building an infrastructure network that covers the entire country has become a very difficult problem in terms of both manpower and money. Therefore, along with the spread of machines that use solar cells, traffic lights and panels that do not require power distribution have begun to spread, taking less time for maintenance as much as possible in the city as well as in frontier areas. As it aims to minimize the use of human hands, the importance of portable lightning rods is also increasing for the protection of those machines.