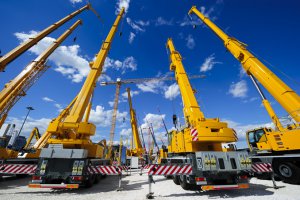 Australia is a country far from the rest of the continent, at a distance from the sea, so we can not use land routes to carry goods, but we will use air routes or sea routes.

The land is surrounded by the Pacific Ocean, the Indian Ocean, and the three large Antarctic Oceans, which are famous for the raging ocean. As a result, Australia’s territorial waters are the third largest in the world, reaching approximately 12 million square kilometers.

There are also transport by air routes, but since it is not profitable unless it is light and expensive, in Australia, goods are usually transported by ocean transport using large tankers.

The large-sized crane becomes indispensable existence when the goods carried in from overseas by the tanker etc. are landed. In addition, various goods are used in various countries to save time and smoothly carry out a series of operations when loading, storing and transporting goods in all countries.

Especially in Australia, where labor costs continue to rise, the ratio of labor costs to expenses is much higher than in other countries, so it is highly necessary to remove human hands as much as possible and improve efficiency with machines. The cost of capital investment will be high for mechanization, but probably Australia’s labor cost is expected to grow year-on-year as well, so considering it, it can be brought into the market in a few years I can say that.

However, the industry where cranes are most active in Australia is overwhelmingly the construction industry. Housing difficulties are taken up as a social problem as the background, and access to traffic to the city center and areas where living conditions are good are not within the reach of ordinary citizens because housing costs soar. It is the same in any country as seeking housing in the low-cost suburbs of land prices, but there are not enough homes in the suburbs, and it is urgently necessary to provide infrastructure including access to transportation.

Australia, which is heavily dependent on Asian economies, benefited from the high economic growth of Asian countries, and in conjunction with it, the number of housing constructions has continued to grow at a high level that continues to rise year on year.

Asian wealthy people are buying homes for investment purposes and housing costs are rising, taking advantage of the economic growth. Local people can not reach a safe and affordable residence. That is dissatisfaction with the government. The government promises to provide housing for the dissatisfaction of the people. This series of flows is also considered to be one of the reasons for accelerating the construction rush.

Cranes are also in demand for overhead cranes and bridge cranes installed in port facilities and factories, but due to the background of the construction rush mentioned above, the most in demand at present are luffing and hammerhead It has become a climbing tower crane, and the tower crane occupies more than half of the total number of cranes.

Most of the tower cranes have their share held by major local specialists, and new entry is a difficult field without the performance, durability, or cost performance over existing cranes.

However, tower cranes are assembled according to the conditions of the construction site and the purpose of use, and parts are removed, etc., so parts are significantly deteriorated more than fixed type, and parts with high durability are required. There are many cases in which the machine is generally installed outdoors, and faces an environment worse than direct sunlight and indoors such as dust and sand, so regular parts replacement is necessary to maintain safety and performance. Certainly, demand can be expected.