The challenges of Australia as a resource-rich country Australia used to be a country with little to offer other than its vast and inexhaustible natural beauty. Of course, Australia’s past and present underground resources of coal, natural gas, bauxite, wheat, corn and beef are unsurpassed, making it one of the world’s leading suppliers of these commodities.

From the 1980s to the early 1990s, Japan’s economy was on an upward trajectory, and the country was ridiculed around the world as an “economic animal” and even called the country where the sun never set. Japan’s trade balance was in a huge surplus that would be unthinkable today, and in an attempt to close the gap, then-Prime Minister Nakasone made a performance to buy American products that were clearly inferior in performance. Australia was one of the few countries in the world to have a trade surplus with Japan, despite the world’s criticism of its unfair trade balance, as it purchased the resources that Japan, as an industrial nation, needed.

With the bursting of the bubble economy, Japan’s economy stalled. Australia’s economic dependence on Japan was high, and there were predictions of an economic recession, but the Sydney Olympics were held in 2000, and Australia succeeded in promoting itself to the whole world. At the right time, China’s economy was booming and it quickly became Australia’s top customer instead of Japan. I was able to find a new sponsor without much effort. This is the reason why Australia is called a lucky country.

However, in recent years, Lucky Country Australia seems to have run out of veins. It was good until they found a new sponsor, but unlike the Japanese, this sponsor is quite greedy. It started off by robbing the Japanese of underground resources for the Japanese market with an offensive of wads of cash, and then extended its reach to fishery products such as tuna and shrimp.

This is due to the fact that Australia is a better environment and a better place to live than China. For example, I have an acquaintance who is reasonably wealthy in China. The thing that impressed me the most when my friend’s parents visited Australia was that they could get fresh vegetables from supermarkets in the city without having to boil them. If the environment is good, people naturally want to live there, but you need to get a visa of some kind to stay in Australia, or any other country of a different nationality. Australia has a system that allows you to get a permanent residency, almost the same qualification as an Australian, if you invest a reasonable amount of money in real estate, etc., and they are making the most of that system.

As a side note, Japan is a country where real estate can be purchased freely without nationality. This is one of the rarest in the world, and the majority of countries restrict foreigners from buying real estate from a national interest perspective.

Naturally, in Australia’s national interest, the Foreign Investment Review Board (FIRB) severely restricts foreign purchases of real estate, but there are always loopholes in the interpretation of the law and the Australian government’s desire to earn foreign currency, so it does not play a fully protective role.

As a result, the wealthy in China and elsewhere have been buying up real estate and Australian land prices have risen at an unusually rapid rate. The rate of increase in land prices is particularly high in the densely populated suburbs of Sydney, where rents have risen two to three times before and after the Sydney Olympics in 2000, depending on the location. The price of a good location has risen so much that local people can’t afford it. Foreigners are holding back on places with a good location, and locals are living in places with bad conditions. This situation is continuing, and with the addition of rising prices, it is casting a shadow over Australia as a major social problem.

For the first time in 40 years, the Foreign Investment Takeover Law has been revised

Also, the Chinese, who have an insatiable appetite to buy, have not had enough of condominiums and other properties and have begun to reach out to Australia’s rich grain belt. Traditionally, most of these properties have been on leased farmland, but due to the severe drought that hit Australia a few years ago, there are many small-scale farmers whose livelihoods are in dire straits. In some cases, Chinese companies are offering more than twice the market price for these farmers, and many of them are willing to give up their farmland.

What is even more surprising is that some small villages have been acquired by Chinese companies. Australia has already entrusted foreign companies with power plants, sewage treatment, port facilities and other lifelines that directly affect the national interest, but for the first time in 40 years, the Foreign Investment Takeover Law has been amended.

The government, which wants foreign investment by the throat, has finally begun to take a stance that welcomes investment that will have a positive impact on the Australian economy but severely restricts investment that harms it.

In a sense, the blowback from the global coronavirus has woken Australia up and made it heavier on China, the country’s alleged source of infection.
The Chinese have declared that they will impose restrictions on resource imports from Australia, but it will be important to monitor carefully how Australia, once a colony of China, is changing. 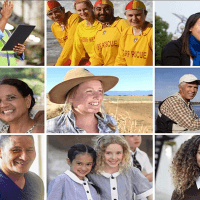