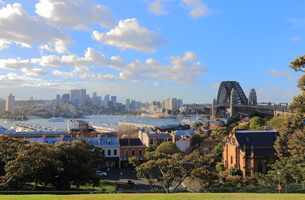 The Australian real estate industry has had some temporary declines, such as the Lehman shock, since the Australian Olympics held in Sydney for the first time in about half a century in 2000. It has come.

“The price of real estate never falls” This phrase is a kind of myth that is constant for us Japanese until the bubble collapses, and it seems that the idea of ​​Australians is the same. It is beginning to hear footsteps that are about to change.

In Sydney, companies are concentrated in the city or near the city. In addition, the infrastructure such as transportation is vulnerable to the rapidly increasing population in Sydney, commuting time is a heavy traffic jam with a car that aims to the city from the suburbs in the morning, and a car that rushes to return home contrary to the morning in the evening Traffic has become a major traffic jam and has been addressed in social issues. In recent years, the government has been focusing on infrastructure improvement, and companies are moving their offices to closer suburbs, but it can not be said that it is sufficient yet. It is inevitable that the city is densely populated in the city suburbs where transportation facilities are good and living conditions are in place, and it can be said that the land price rises along with it, but real estate prices are still abnormal It can be said.

For example, a property with two bedrooms, a shower room, and an apartment type in the living room over about 100 million yen in Japanese yen is not considered to be a fair price for the property, and it can be said to be overvalue. The background is the offensive ambition of highly motivated Asian investors. Even if the property is clearly overvalued, it will continue to soar as long as there are buyers.

Japan is a slightly different country from the perspective of global standards, and it is possible to buy real estate without being a Japanese nationality and permanent resident holder, but most countries including Australia have security real estate for foreigners. It is not permitted regarding the purchase. However, just as there is a proverb saying that the hell of hell also depends on money, there is always a small window on the side of regulation in the world. In principle, Australia is not an exception, as it is not possible for foreigners to purchase real estate, and it is possible to purchase it if it is approved by the FIRB (Foreign Investment Review Board). And depending on the value of the property, it could be considered that the possibility of acquiring permanent residence in Australia also spurred the rise in land prices.

Australia shaken by domestic and foreign public opinion and policies

Australia’s population is indeed angry at the land price soaring too much, mass media also involved, “Foreign property buying clam causes land price soaring, and as a result My Form has become out of reach of ordinary people. It began to make a noise. Although the Australian government wants to improve the treasury by investing in Asian wealthy people, mainly from China, it is the Australians who actually have the right to vote. The state like the sandwich continued for many years. However, trends in global protection policies and the rather aggressive capital outflow restrictions enforced by the Chinese government are also making a significant impact on the Australian real estate industry.

The top investment in Australian real estate is by far from China, and the investment from China in 2016 is said to be approximately $ 31.9 billion. However, the relatively strong transaction auction rate, which was relatively strong in fiscal 2017, began to fall around the middle of 2017, when the capital outflow restriction was rumored, and it is likely to record the lowest winning bid rate in the past 10 years in August. became. Although the final result is not yet known, the investment amount from China in 2017 is expected to decrease to about $ 15 billion from the previous year.

By 2020, when the Tokyo Olympics will be held, land prices for the two major cities represented by Sydney and Melbourne, Australia, are expected to decline by approximately 4 and 5%. In any case, not only Australia’s real estate industry, but the whole economy is heavily influenced by China, so it can be said that the market may change significantly depending on China’s policy in the future.